Who doesn’t love a good Kung Fu Panda movie? Never seen it? Well, “Kung Fu Panda” is Po Ping, a panda bear adopted by his goose father, Mr. Ping (a transspecies adoption).  We learn in Kung Fu Panda 2 that when Po was a baby, his biological parents were being chased by wolves and that before his mother was killed, she hid Po in a crate to save his life; Mr. Ping later found and adopted Po.  At the end of the movie, we learn that Po’s birth father is alive, and that he becomes aware that Po is alive as well. While I loved Kung Fu Panda 2 (read my review), this final scene is accompanied by threatening music, and left me concerned about how this revelation would be handled in Kung Fu Panda 3. 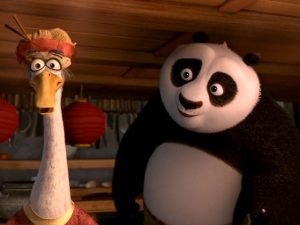 I am pleased to report that I was not only relieved, but completely delighted by this sequel that portrays wonderful, accurate messages about adoption.  When Po is reunited with his birth father, Li Shan, and enters the world of Pandas, he is both ecstatic and overwhelmed as he tries to embrace Panda culture and ways of being.  Mr. Ping is initially threatened and jealous of Po’s unfolding relationship with Li because he is fearful of losing his son to his birth father. (In Kung Fu Panda 2, we find out that Mr. Ping didn’t tell Panda his adoption story for 20 years out of fear of losing him.)

The movie beautifully captures Po’s quest to answer the “Who Am I?” question – which is the central theme of the movie.  As Po strives to discover and embrace his unique identity so that he can “be the best of who he uniquely is,” the movie sends a lovely, universal message for everyone – adopted or not. However, as with all adopted persons, this identity challenge is more complicated because of the need to integrate two sets of families who may be quite different.  We watch Po come to the realization that to know himself, he must embrace and integrate all of his disparate parts – his Panda part with the influence and learning from Mr. Ping, his friends, his mentors, etc. This crucial realization leads Po to harness his strength and become the best of himself – which enables Po to be the hero who saves his world. 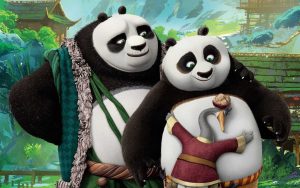 Especially heartwarming is that from the very beginning, Po’s birthfather, Li, embraces Mr. Ping and as the movie unfolds, Mr. Ping comes to appreciate, accept and fully embrace the importance of Li in his son’s life. (I have witnessed this transformation with the loving, courageous birth and adoptive parents with whom I work.) When Po becomes angry with Li, Mr. Ping is instrumental in helping Po forgive and understand his birthfather. He affirms Po’s need for both of his fathers in his life. .. and this of course, helps Po to figure out who he is and what he must do to defeat the enemy. Wow!

Of course, these messages are simple and reality is much more complex and not always so positive. It is important to remember this movie is geared toward children and must have a happy ending.

Some parents may be concerned that if their children see this movie, their children will be hurt because their adoption stories are filled with pain, and/or that reunion with their birth family is unlikely, and maybe even undesirable. They may feel this movie is not appropriate for their family. I always advise parents to see adoption themed movies first to determine if there is benefit for their children to see the movie. Will it generate important discussion? Will it help children express their feelings? Parents may also want to view the movie to be aware of what their children’s friends are learning about adoption from the movie.