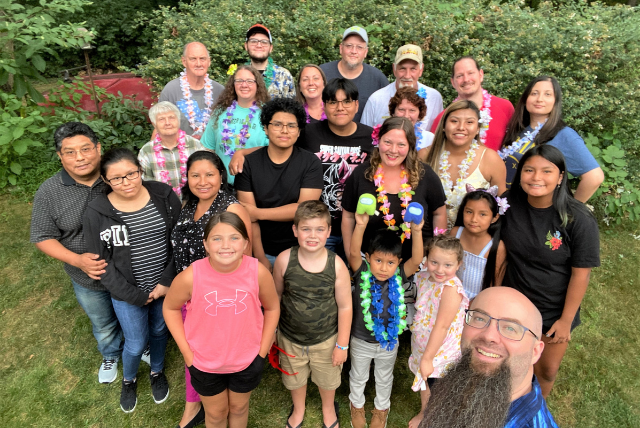 Jayra’s essay, “My Losses Led Me Home,” was first published in the May 2021 edition of
Magnificat: A Journal of Undergraduate Nonfiction at Marymount University.

My Losses Led Me Home

I lost all my family as a young girl.

I didn’t lose them all at once, though, and with each loss I faced a new challenge.

Through each setback, however, I got closer to home.

I lived with my single mom until she met my stepdad when I was three. They had my sister a year later, and when I turned seven, my mom, sister, and I traveled to Bolivia for what I thought would be a short vacation. We stayed there for almost two years. I lost my stepdad and home in the U.S. without even realizing it.

We lived with my grandparents in Bolivia until my mom sent us back to the United States without her when I was nine. She was not able to come with us because she was an undocumented immigrant, which did not allow her to return. With one long airplane ride, I lost my home in Bolivia, my grandparents, and my mom, whom I haven’t seen since.

Eventually, we reunited with my stepdad, who I considered to be like my biological dad because I felt like we had a father-daughter bond. He even went to court multiple times to gain full custody of me. However, soon after I returned to the U.S., everything changed, and he began treating me as if I was his maid. When I turned eleven, he forced me to clean the entire apartment, cook all the meals from scratch, bathe my little sister, take her to and from school, and stay home from school if she got sick. If I didn’t keep the house clean enough, if the food I prepared wasn’t good enough, or if I did poorly in school, I was beaten with a belt.

Then the abuse changed and got worse. My stepdad broke the father-daughter bond we had, and I endured trauma no child should ever have to experience.

I hated my life. I struggled to get out of the depression, and I even tried ending my life because of the abuse from my stepdad and the things he made me do. I did not know how to express my feelings in a way that I could explain and let out how I truly felt inside. In school my grades dropped: I went from Bs to Fs. Everyone in school thought I was slacking and not wanting to do work, but little did they know my life was falling apart.

When I was thirteen, I decided to stop the abuse. I called my biological mom in Bolivia, who helped me call the police. Speaking up was not the easiest thing for me to do because my stepdad threatened me, saying if I ever told anyone about the abuse, I would be separated from my sister and never see her again. But I was afraid that my stepdad was going to hurt my sister the way he had hurt me. I could not let that happen, so I spoke up and put an end to all of the abuse.

After my sister and I were removed from my stepdad’s care, we were put in the foster system. We lived in several houses, but none of them felt like home to me. I was always anxious and worried, thinking of whose house we were going to go stay at next, or if my sister and I were going to be separated. The loss of a family can be hard, especially for children and teens, because we do not know where we will end up next or what is going to happen. Many kids in my situation never feel like the house they are staying in belongs to them. For me, I always felt like we would leave again soon. And I never felt wanted.

Pretty soon I was fifteen. I assumed nobody would want to adopt a teenager, so I figured I would be aging out of the foster system in a few years. According to the National Foster Youth Institute, teens who age out of the foster system have an increased chance of becoming homeless, facing unemployment, becoming young parents, and suffering PTSD (Sorrell). Youth who age out have a slim chance of getting a college degree (Sorrell). That was going to be me, trying to start my adult life with no home, no family, no support, and no direction.

But when I was almost sixteen, I met two special people: my adoptive parents. My journey with them was not easy: I had to adjust to moving schools in the middle of the year, living in a new neighborhood and city, making new friends, adapting to a new culture of my non-Hispanic parents, and communicating my thoughts and feelings. Even though my social worker told me that this was going to be my permanent home, I was anxious because I did not want to do anything to make my new parents return my sister and me to the foster system.

However, my journey with my parents was not impossible. At first it was nerve racking, but as I got to know my parents better, I started feeling a little more comfortable. Eventually my sister and I got used to being in their house, and because I had people to talk with about my day, family dinners with no arguments, Friday pizza and Dairy Queen nights, family trips (to the beach, Six Flags, and the mountains), and no fear of harm, the house became a home to us.

Over the last year, I have raised my grades from Fs to As and Bs, I made the honor roll in the first quarter of my senior year, and I will be attending college in the fall. Most importantly, my sister and I finally have a forever family. We were officially adopted on July 29, 2019, and we have never been separated from each other during this process.

What many people don’t understand is that, although the abuse was bad, the worst part was repeatedly losing my family members and moving around so much as a child. Ever since I was placed in my adoptive home, I have seen how much stability, routine, and a safe, supportive atmosphere can help a child feel assured and grow.

Over the last eighteen years, I have learned that not everything in life goes the way we expect it to, but I have also learned that even if we feel like life is falling apart, we should not give up on ourselves or our futures.

It is even possible that the journey, with all the losses and grief, just might lead us home.

C.A.S.E. was able to provide trusted resources to Jayra and her family: Specialized mental health and related services for adoptive, kinship, and foster families to help them process past traumas. Thanks to a special matching gift pledge, your donation today will DOUBLE, dollar for dollar, making your generous support and the lifeline it provides families go TWICE AS FAR.