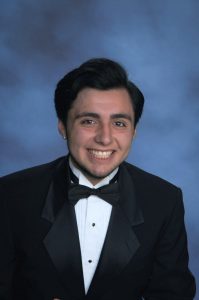 Daniel Leonard is a 2016 Star of Adoption! After 18 months in foster care, Daniel and his sister joined the Leonard family when he was 2 1/2 years old.  Now 18, Daniel is a senior at Walter Johnson High School in Bethesda, Maryland. Daniel was a columnist for Walter Johnson’s newspaper, an officer of several clubs and a member of the stage crew for WJ’s very active drama group.  Last year, Daniel was selected to represent all of the high school students in Maryland at a national conference on civic engagement.  As part of the conference, he met with Congressman Van Hollen to present a teacher evaluation and feedback program he developed and which he hopes will be implemented nationwide.

For three years, Daniel taught Sunday school for the Interfaith Families Project of Greater Washington.  He also is a graduate of Outward Bound’s sailing program. Accepted by several colleges, Daniel is planning to attend Mercyhurst University in Erie, PA.