Therapeutic Interventions with Sexually Abused Children and Their Families 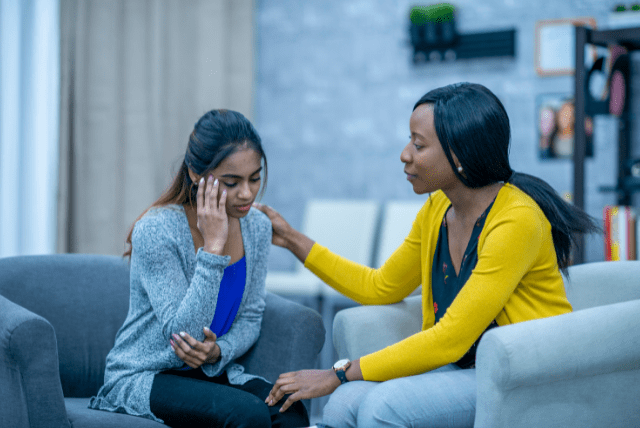 Approximately 10% of youth in foster care are victims of sexual abuse. The abuse may have occurred before the children came into care, or as difficult as this is to accept, occurred in a foster care placement.

The perpetrators may be adults, adolescents, or other children, including siblings. The nature of the abuse can vary from being physically violated to witnessing sexual activity.

What all victimized children do have in common is the violation of their bodies and appropriate boundaries. The resulting loss is of trust in adults, either because they perpetrated the abuse or failed to protect them from the abuse. Helping children heal and recover from the trauma of sexual abuse takes time and patience and is most effective when both child and caregivers are involved in the treatment process.

Because the greatest consequence of sexual abuse is the loss of trust in parental figures, effective treatment must always integrate parents into the treatment process. The ways in which parents respond to the child, the messages they give, the behaviors they model, their responses to the child’s conflicted feelings and behaviors which result from being traumatized set the stage for the child’s recovery.

Therapeutic Support for Children and Their Families

The therapeutic support of a therapist who specializes and has experience in treating children who have been victimized is essential.

The parents will need education about the ramifications of abuse and its emotional, physical, and spiritual impact upon the child, as well as clinical support and ongoing guidance.

Interventions with parents have many facets. Foremost, the parents themselves must come to terms with the abuse and accept that their child has been traumatized.

This can be a difficult process therapeutically, as many parents may have indicated during the placement process that they would not consider parenting a child who had been sexually abused, and therefore had no idea abuse had occurred. This can happen when the child has not disclosed abuse or was too young to make sense of what happened to them.

It is, therefore, not uncommon for the adoptive parents to feel confused, anxious and angry when the trauma is revealed. Parents often wonder why the disclosure is happening now.

They may be reluctant about engaging in therapy because their deepest internalized fears have been realized.

They may think, “What I have read is true,” “The social worker was right about the possibility of early harm,” “How can I parent a child who has had so many bad things happen to them?” or “What do we do?”

Again, often, symptoms of trauma are deeply repressed, leaving the children unaware, yet emotionally vulnerable. Parents need to understand that recovery involves healing the psychological harm by helping to establish safety, acknowledging the trauma with the child, supporting them through the loss and grief process, and ultimately supporting the restoration of interpersonal relationships.

Parents must convey to the child that they believe what the child has disclosed; their acceptance helps to foster the child’s acceptance, “freeing” the child to heal. Opening the disclosure within the family also begins to wipe away the years of secrecy and denial. The child is no longer alone.

Parents also need support to understand the complex feelings that result in the confusing and distressing behaviors often exhibited by the children who have been sexually abused, including lack of trust, self-blame, worthlessness, lack of control, anxiety, depression, fearfulness, and guilt.

As this understanding evolves, it is essential that the parents learn what normal sexual development is in children so that they can distinguish between appropriate and inappropriate behavior.

For example, it is not uncommon for sexually abused children to initiate excessive or inappropriate affection toward their parents and others. Teaching parents to recognize “sexualized” behaviors such as these is critically important.

As it can be extremely overwhelming to cope with their children’s misbehaviors, fears, or rejection, parents also need guidance around giving appropriate and healing responses to their children.

These parental actions are the foundation of building trust in adults and parental figures as well as building self-esteem.

Maria, 8, was referred to therapy because of the following behaviors: bedwetting, having bowel movements outside the toilet, nightmares, refusing to take baths and engaging in self-injurious behaviors. In the first few family therapy sessions, the therapist observed Maria sitting on her father’s lap and stroking his face in a flirtatious manner. After months of therapy, it was ascertained that Maria had been molested by her maternal uncle and witnessed her older brother and younger sister being abused as well.

The course of treatment for children like Maria is often complex and lengthy. The child’s ability to recall the traumatic events falls along a continuum, which is built upon a sense of safety, trust, and confidence in the therapist. The child must feel that the therapist “genuinely cares about him or her and will not hurt him or her.”

As the trust with the therapist solidifies, the child will slowly move along the continuum of disclosure one step at a time. Individual therapy with children who have experienced sexual abuse is essential to ensure their recovery. The therapist begins the process with an accepting, non-judgmental attitude by establishing clear, safe, respectful boundaries within the therapeutic relationship.

A primary treatment objective is to move the child to an understanding and acceptance that he or she was not in any way responsible for the actions. Helping a child to be released from this heavy burden may be the most important piece of the therapeutic process.  In the above case example, in addition to her feelings of confusion, anger and betrayal, Maria also had positive, loving memories of her uncle and was coping with strong feelings of disloyalty and loss.

When the perpetrator is a parent or other caregiver, it is hard for a child to come to understand how and why the person who was supposed to love and protect him or her from the hard can be the person who caused such harm.

Children who have been betrayed by people they love, and trust need help to understand how it is possible to have two opposing feelings about someone at the same time. Maria also rationalized her uncle’s behavior with the thought that this happened because she was bad. The shame that she carried within her is found in the minds of most children who have been abused.

Maria experienced tremendous guilt because she had experienced some physical pleasure from the experience. The therapist talked with Maria about what grownups are supposed to do and not do and that what her uncle did was not an appropriate expression of love and caring – putting the responsibility for the abuse on the adult.

Equally important, Maria needed to understand that her physical reaction to pleasure was automatic. The therapist explained to her that the body has certain normal reactions to physical stimuli or stimulation, like coughing, sneezing or blinking which you have no control over, removing the tremendous sense of confusion and guilt Maria was absorbed by.

Maria also needed help to understand that she had learned to use certain behaviors to seek attention because that was all she knew and in her new family, she would learn new, appropriate ways to get attention. She was helped to understand that many of her problematic behaviors were a result of fear, anger and anxiety and that she would also learn new, healthy ways to handle these feelings.

For example, Maria was helped to understand that when she scratched herself, she was angry, and instead of doing that, she needed to be able to say out loud what she was angry about.  Maria was eventually able to verbalize her anger over the fact that her mother should have but did not protect her from her uncle’s abuse.

Therapeutic Expression for Children and Adolescents Healing from Sexual Abuse

To make sense of what happened and heal from the past, children need help to express all of their painful feelings related to the abuse. Therapists use several techniques to aid in this process. Many children are able, with support, to verbally express what they are feeling. Other children may need less direct expressive techniques to assist in the identification and expression of feelings connected to the trauma.

Storytelling, use of creative arts, drawing, painting, collage making, finger painting and sand tray therapies are effective techniques when working with traumatized children. Artwork is an excellent tool in both helping the therapist in the assessment process of what happened to the child and as a medium for the expression of feelings.

A therapist might request, “Draw me a picture of a time when you felt scared.” “Draw me a picture of where you go to feel safe.” You can also have children draw a diagram of a body where they feel certain feelings, such as happy, sad, angry, scared, and confused.  Other children demonstrate their feelings and experiences through play therapy. They may re-enact what happened to them, by using doll figures, puppetry or psychodrama.

No matter the medium used, it is critical that the therapist enters the world of the child. This will necessitate the use of the child’s language in a safe, nurturing manner.

It is important for all those involved in the treatment of children who have been sexually abused to understand that children process these issues differently as they grow and mature. It is likely that these issues will resurface again at later developmental stages and that the children will most likely need to be involved again in therapy.

As traumatic as the experience of sexual abuse is, parents need to know that therapy is tremendously successful in helping victims and their families recover and mitigate the potential life-long impact.  The key to success lies in having families who have the courage to support their children through the healing process.

We are here to support you

At C.A.S.E., we provide specialized adoption competent mental health services and ongoing post-adoption support in Virginia, Maryland, and the District of Columbia to adoptive, foster & kinship families. If you are looking for counseling services or post-adoption support, we are here to help. Schedule a free consultation to learn more about our services.