National Adoption Month is all about celebrating family, raising awareness, and educating others about the joys and challenges of adoption. 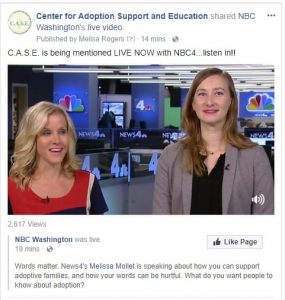 C.A.S.E. Clinical Director Lisa Dominguez was credited with sharing insightful tips. The event was viewed on Facebook more than 5,500 times in just the first few hours.

NBC4 also published the full interview with Lisa Dominguez in a news article, calling out C.A.S.E.’s W.I.S.E. Up! Program where members of adoptive families are coached in how to respond to insensitive comments associated with adoption.

“Most of the time, people are not malicious, they’re just curious. But there’s a lot of power in the language that people use. Words matter, especially for children,” – Lisa Dominguez

Read the full news article from Lisa’s interview with NBC4