Star of Adoption – The Vasquez Family 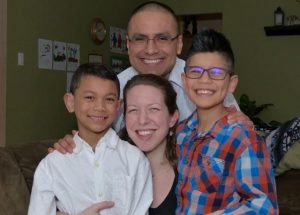 The Vasquez family is a 2016 Star of Adoption! Kaari and Lee Vasquez are the adoptive parents of two young boys that they adopted through foster care. The older one joined the family at three months and the younger one at two years. The Vasquez’s have done an incredible job of including both of the boys’ birth families into their lives. They have been accepting and non-judgmental of the birth families while also setting some healthy parameters as to their involvement in the boys lives.

Kaari and Lee have also been active foster parents for numerous children over the past nine years and have dealt with heartbreaking challenges during that time including the death of a foster child’s baby. They continue to stay in touch with the children they have fostered as well as the families that have adopted them, even providing child care when needed. They recently transitioned a young boy to his birthfather in Central America which was a difficult process for all involved. The Vasquez’s have incredible knowledge of the complexity of adoption and attachment and share this knowledge willingly with others. They are active in their Church where they conduct weekend trainings on adoption through the TCU Institute of Child Development and are involved in a support group for adoptive parents at the Church.  This exceptional family has opened their home and their hearts to those that need it most.