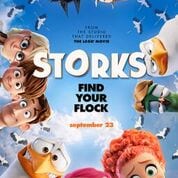 Since this movie was promoted as being a story about babies, children and families, I was intrigued to see what, if any, underlying messages would be conveyed in the movie and how they might impact foster or adopted children. Although my reviews are not intended to be viewed through the lens of an expert movie critic, I must say that I did not enjoy this movie overall, as much as others I have seen.

That being said, I’m sure children (and some parents) will find it entertaining enough, whether in the theater or when released for television viewing.  If you decide to have your child view the movie (if you can control that decision), I’m sharing my thoughts about the themes conveyed by the plot.

The main character is referred to as “Orphan Tulip” because she was never delivered to her “real parents” and has grown up living with the Storks. When someone uses that name, Tulip says, “Just call me Tulip, ‘Orphan Tulip’ hurts my heart.”  Tulip doesn’t “fit in” with the Storks because of course, she is human – different.  She’s tolerated by them but is supposed to be “fired” (told to leave) on her 18th birthday. Lonely and isolated, her dream has always been to find her “real parents.” Painful stuff.

At first, the story is that she was never delivered to her parents because the stork, “Crazy Jasper,” fell in love with her and wanted to keep her.  However, we come to learn the truth, which is that the “compass” was accidentally broken during the delivery journey, and Jasper who loves Tulip dearly, has spent all these years trying to fix it so he can help her find her family. Makes sense and conveys loving message.

The Storks closed down their baby making factory and had stopped delivering babies a long time ago because “there are other ways to make babies” (whatever that is supposed to mean) and instead have become a product delivery service like Amazon. However, Tulip accidentally makes a baby, and Junior (the stork who was supposed to fire her who becomes like a brother and friend) are charged with delivering the baby to her family. They have to fend off wolves that fall in love with the baby, as well as the Head Stork trying to stop them.  Tulip and Junior come to love the baby, as does everyone else who sees the baby. This can be a good message to show that love and a sense of “family” is not based on being biologically related. You don’t even have to be the same species to be family. Tulip and Junior love the baby but their mission is to give her to her “real parents.”  Perhaps children who were cared for by others before their adoption– foster parents, orphanage staff, others – will view this and be able to imagine that they too were loved by people not meant to raise them.

At one point, a character in the movie suggests that it doesn’t matter if the baby gets to her “real parents” – that the baby can go anywhere because – “they don’t know who their real parents are.” I think adoptive parents and adopted children would find this line cringe-worthy. Fortunately, the movie plot does not support this belief – however the central theme of babies belonging to their “real parents” is sure to provoke much interesting discussion with your children, if you think it would not be too troubling.

The enormous emphasis on how wonderful babies are – and the movies shows every race of baby fortunately, might confuse children who were adopted at older ages into their families, especially if there are birth children or children adopted as babies in the family.  Are children adopted not as infants less precious?

Tulip does find her family. You know they are her birth family because everyone, immediate and extended kin, all have the same red curly hair that she has. This is a nice part of the movie.  Her family warmly (and literally) embraces her, and her Stork family is there supporting and witnessing the introduction. Tulip’s inclusion of Junior in the embrace reaffirms the concept of her family being the storks who raised her as well as the new clan of redheads.

As I do with every review, I recommend that if at all possible, parents view the movie to determine its appropriateness for THEIR child.  Again, while it makes sense to protect children from unnecessary hurt, adoption-themed movies can be a great vehicle for opening the door to conversation about adoption and about the messages, both helpful and unhelpful, accurate and inaccurate, that are portrayed in popular culture.  It is so important to help children express what they may be thinking and feeling (but holding inside) and movies can be a terrific catalyst for this expression.