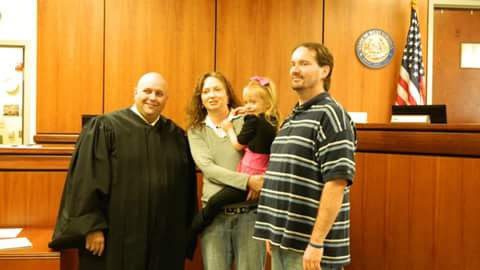 In June of 2009, when my husband’s biological niece was 1 1/2 years old, she and her older sister entered foster care. This was very difficult for my daughter, my husband, and myself as we had been as we were all very close to them, so I can only imagine how it felt for the girls. My husband and I had been caregivers for them and more a part of their lives than either of their biological fathers or even their mother at times. I immediately contacted DHHR regarding visits but did not see the children again until May of 2010.

During that time, they were in four different foster homes. In May my daughters and I were attending a local carnival where we ran into the girls with the foster parents. I introduced myself and explained to the foster mother how I had been trying to see the girls. Within a week I had unsupervised visits with the girls! Fast forward to December of 2012 when after many court hearings we were finally able to adopt the youngest (the oldest lived with her biological father’s sister).

My daughter was old enough to understand most of what was going on. She was so excited when we were able to change her last name to Lambert! Occasionally she will talk about her first family (her birth parents) and say they ran away from her and did not want her. I tell her that her parents were simply unable to care for her. But I remind her that not only did WE want her, I showed up at DHHR for MDT’s that I had not been invited to, made multiple calls to workers, attended multiple court hearings, and more that I don’t even mention…just so that we could make her a FOREVER part of our family!