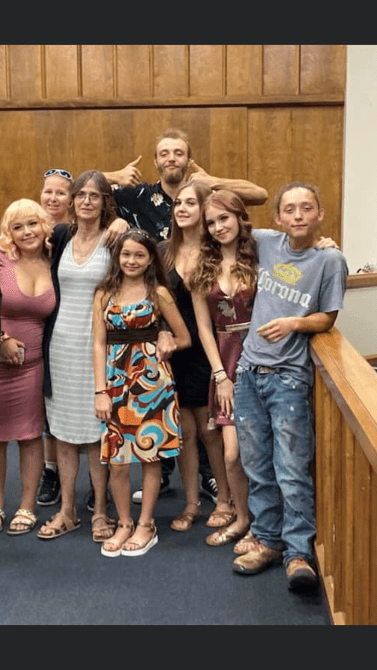 There were 6 of us children living at my bio mom’s house, by the end of the divorce there were 5. We had barely anything and had to borrow everything from everyone.

Luckily, we had a patient and caring neighbor who got us anything we needed. Her name was Elizabeth, we called her Auntie Liz. She didn’t like being called “Liz” yet let us do it anyways. Elizabeth co-parented us for a year or so. My bio mom got many CPS reports and Welfare Checks, from numerous people. The neglect was obvious. We were all taken from our homes in 2019. It had just turned 2019 matter of fact, we got taken away on New Year’s. The cops came to get us and we had just wanted to tell Elizabeth goodbye. She told us we weren’t going to be away for long because she would help us and take us into her home. She wasn’t able to take all 5 of us and personally, I didn’t want to be so close to my bio mom who lived 2 doors down. She took my two younger sisters who were 8 and 9 at the time. As for my other siblings, the two youngest who were 3 and 4 got taken to a different home. My older brother and I who were 13 and 15 were housed elsewhere also. My older brother I was with ran away from the foster home and got to go live back with my bio mom since he was old enough to do that. The 2 younger girls stayed at Elizabeth’s house, then the 9-year-old was taken to her bio dad’s house when she was 10.

By that time, I felt alone and had been in almost 15 different foster homes and thought I had no chance of being adopted. Then, I moved in with Elizabeth on my 14th Birthday. We had never talked about adoption. Then one unfortunate day, my bio mom ended up deceased.

Elizabeth, her other kids, and my foster care team were the only people there for my siblings and me. After my bio mom had died, my older brother had to go live with his bio dad too, he was 16 then. One day Elizabeth asked me and my younger sister how we felt about adoption. Her adopting us. We agreed and all of a sudden that’s all we wanted was to be out of the foster care system and to be stably living with someone who is genuine. The process was a long wait, but everyone was working so hard toward it. We had to take detours and we had to fight people in court. Being the “oldest sister”, I felt obligated to be not only my voice but my siblings’ voices. Against everyone who was trying to take us from the only stability, we’ve ever known.

From age 14-16 we were in the “Adoption Process”, that’s where a bunch of papers were filled out and run by the courts. It took a long time because it went through so many busy people. We had court once every other month, but we had a strong team and support system. There were roadblocks and inconveniences, but we all worked together and made the adoption final. It felt like it took a long time, which it did. We made it out and got adopted and I couldn’t be more grateful for the thriving journey it’s been. We met a lot of people who wanted to make things better for us and we will never forget them.