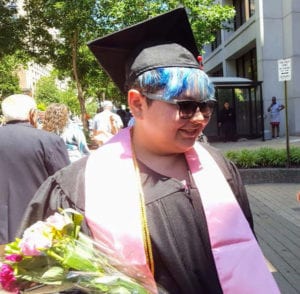 Eve Alcalan is a 2020 Star of Adoption! At 15 years old, Eve took a chance. She moved from sunny Orange County California, not just to the East Coast, but the fast paced Washington D.C. area. Eve started at Northwood High School in Silver Spring Maryland as a sophomore and soon everyone knew her name. She joined the Academy of Dance and Musical Theater and played trumpet in the symphonic and pep bands, in addition to playing in the pit orchestra for most Northwood stage performances. Eve was awarded for her role as a leader in the band and assistant to the conductor. By the end of junior year, Eve had conquered the public transportation system and started looking for her first job. Eve loves cooking and baking for others and her first job at a sushi counter made her more interested in working in food service. After graduating from Northwood, she went on to work at Cookie Dough & Company at Montgomery Mall before landing her career at Starbucks. Eve truly embraces her role as a barista and working for such a supportive company. She is working towards pulling the perfect shot of espresso and aspires to work in one of the Reserve Starbucks stores. Eve hopes to travel to Japan in the future, and is working to learn the language. She enjoys Anime and video games as well as music of all types. Eve has always maintained a great relationship with her biological grandfather, aunt and younger brother and sister and visits them in California regularly.