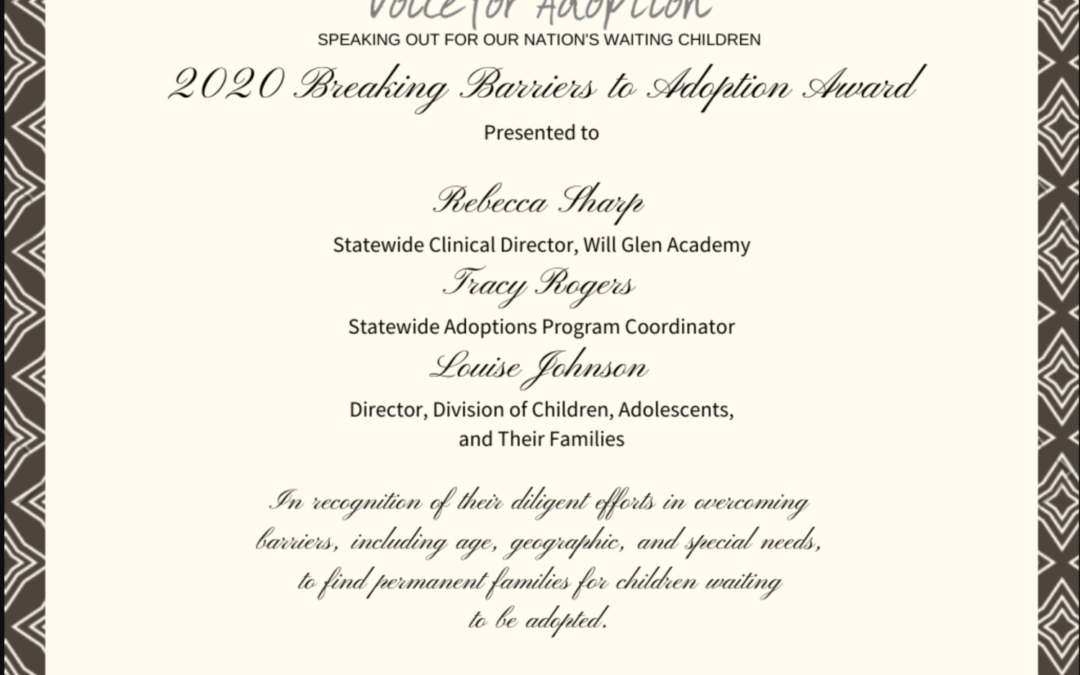 Every November, during National Adoption Month, Voice for Adoption (VFA) honors individuals and organizations that have made a difference for children and families involved with the United States child welfare system. In 2020, VFA had four awards, one of which was “The Breaking Barriers Adoption Award.” which is presented to a state, county, tribal child welfare agency, or dedicated individual that has made diligent efforts in overcoming barriers, which can include age, geographic, and/or special needs, to find permanent families for children waiting to be adopted.

In 2015, South Carolina Dept. of Social Services was chosen by the leadership of the National Adoption Competency Mental Health Training Initiative (NTI) as one of 9 pilot sites to implement the state-of-the-art web-based trainings developed for child welfare and mental health professionals. NTI was a 5-year cooperative agreement between the Children’s Bureau and the Center for Adoption Support and Education (C.A.S.E.) to develop web-based trainings to enhance the adoption competency and capacity of child welfare and mental health professionals to effectively address the mental health needs of children and youth and their foster, adoptive and guardianship families.

Relationships and communication proved to be key for success.

At the time, South Carolina DSS was immersed in a consent decree and, without a department director, was experiencing a lack of continuity in leadership. Like many states, SCDSS was also experiencing high turnover among child welfare staff and lacked resources to meet the current training needs of its staff. When NTI leadership reached out to Becky Sharp, then Senior Program Manager, regarding her interest in her agency serving as a pilot site, she responded immediately. Following multiple conference calls including child welfare, mental health, and training leadership to assess the need for adoption competency training, South Carolina was chosen as a pilot site. Tracy Rogers, then Statewide Adoptions Program Coordinator, was brought on board to co-lead the initiative with Becky. From the beginning, Becky and Tracy were passionate supporters and champions of the initiative. As a smaller, largely rural state, South Carolina had the advantage of strong partnerships between Child Welfare and the public Mental Health system, as well as strong partnerships between the pubic sector and private providers. What South Carolina lacked in resources, they made up for in relationships, which proved to be crucial for their success in piloting NTI Trainings for Child Welfare and Mental Health Professionals.

An Implementation Team was assembled that included representation from the state departments, private agencies, and the Palmetto Association of Child and Family Agencies. This team was charged with overseeing and supporting the implementation of NTI trainings across the state. As a state with a state-administered child welfare system and a largely public mental health system in place, one advantage for South Carolina was that they could mandate staff to participate in the training and communications to staff about the training could be centralized. The plan was originally to have adoption, licensing and home-study staff complete the training but as the pilot continued from January 2017 through January 2018, and word got out about how much staff were enjoying the training, staff in other child welfare positions began to participate.

A total of 603 staff – 439 child welfare staff and 175 supervisors participated in the NTI Training Pilot for Child Welfare Professionals with an overall 82% completion rate (505 completers).

As with all pilot sites, the results of pre to post test scores were very concerning, with the average score for module pre-tests as low as 16% (1 out of 10 questions correct) to 58% (five out of 10 questions correct). The post-test scores ranged from 85% to 98% correct, reflecting significant gains in knowledge across all 8 modules. Implementation team members were very concerned by the results but also encouraged by the knowledge gains and the testimonials provided by pilot participants reflecting practice changes and how the training had impacted them:

“The main ways I have applied this training into my work is helping parents reframe their children’s behaviors as well as discussing the importance of openness with parents, benefits of connections with birth families (when safe), and the negative side effects of keeping secrets. I have also begun to look more closely at parents and their potential issues prior to placement occurring.”
SC NTI Training Participant

Armed with the results from the child welfare pilot, Louise Johnson, Director, Division of Children, Adolescents and Their Families with the SC Dept of Mental Health became actively involved in the pilot and made the decision to mandate all the child/adolescent therapists employed in regional mental health centers and schools to participate in the NTI Training Pilot for Mental Health Professionals. This expectation resulted in even higher numbers participating – a total of 839 mental health therapists enrolled in the training with 619 (74%) completing the training. This reflected the single largest number of enrollees and completers among the 8 pilot states. As with the child welfare pilot, the results were concerning with pre-test scores ranging from 30% to 60% and the post-test scores ranging from 91% to 97%, again, reflecting statistically significant results. Again, the team was heartened by the gains in knowledge and the positive feedback from training participants. Further insights are shared in the video, “The Value of NTI for Child Welfare and Mental Health System Collaboration.”

“It opened my eyes greatly to blind spots that I had no idea that I had. That awareness has significantly increased my ability to understand more fully how to identify needs and strengthen the family’s ability to manage crises.”
SC NTI Training Participant

Through the initial leadership of Becky Sharp and Tracy Rogers at SC DSS, and continuing with current leadership of Garry James (Director, Staff Development and Training), Dawn Barton (Director, Permanency Management) and Karen Bryant (Deputy State Director, Child Welfare Services) along with the SC DMH leadership of Louise Johnson (Director, Division of Children, Adolescents and Their Families) and Sandy Hyre (Director, Evaluation, Training and Research), South Carolina took the bold step of enhancing the capacity of child welfare and mental health professionals to effectively address the mental health challenges and positively impact the well-being and stability of children, youth and their foster, adoptive, and kinship families. And the commitment continues! The SC Department of Social Services is currently integrating NTI into the state’s new learning management system and will require all child welfare staff to complete NTI Training for Child Welfare Professionals and supervisors to complete the Training for Child Welfare Supervisors. Additionally, the Department of Mental Health is integrating the NTI Training for Mental Health Professionals into its statewide learning management system with expectations for the public child/adolescent therapists across the 12 regional centers and school-based settings to complete the Training for Mental Health Therapists.

NTI was funded through a cooperative agreement (#90CO1121) between the Children’s Bureau, Administration for Children and Families, US Department of Health and Human Services and the Center for Adoption Support and Education (C.A.S.E.). Explore the NTI website: www.adoptionsupport.org/nti.