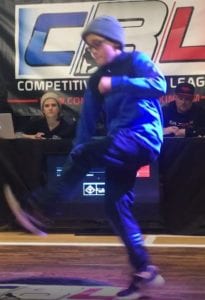 Hi, this is an adoption story for Nicky, as told by his dad and mom.

Nicky is a witty, charming, high-energy, and sometimes rascally 11-year-old boy who joined our family when he was 1.5 years old.  When he was 6, we thought Nicky would enjoy karate since he was very coordinated and energetic, so we found him a class, explained how karate would help him learn self-control and channel some of that energy…but he was just not comfortable learning karate in front of a bunch of strangers.  So, we withdrew from the class.

Over the last several years, some very patient and insightful counselors at C.A.S.E. helped Nicky learn to identify and overcome many of his fears. After seeing that Nicky was gaining confidence in himself, we brought up karate again, but he just wasn’t interested.  But, could he try break dancing like his friend Joaquin from down the street?

We thought to ourselves, “Break dancing?  Is that even a thing?  Didn’t that die out in the ’80’s?”  But to Nicky, we said, “Yes!  Let’s give that a try.”  And try we did.  Nicky took to this amazing urban dance form like fish to water and it’s been an indescribable joy to watch him perform and grow more and more comfortable doing “top rock, footwork,  freeze, and power transitions” in front of his teacher, fellow students and their parents. People who, for a while at least, were strangers.

Nicky has worked so hard and has done so well that he’s now performing at regional competitions and recently won a “Rock the Box” competition against “b-boys and b-girls” from up and down the East Coast. I hope you enjoy the movie of one of his performances.

Many thanks to C.A.S.E. for helping our big boy slay a few of his demons!  We can never repay Nicky’s counselors, but we do want to express sincere thanks for the miracles they perform every day.

P.S. Nicky was also featured in the “C.A.S.E. Helped Me” video! Check it out!