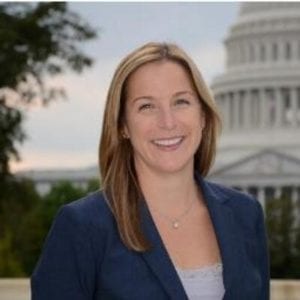 For almost twenty years, Kathleen has been a sought after expert on policies related to the welfare of children. As a trusted advisor to Senator Mary Landrieu, Kathleen worked to pass key pieces of legislation including the Intercountry Adoption Act, the Child Citizenship Act, the Adoption Tax Credit and the Family Court Act. As Executive Director for the Congressional Coalition on Adoption Institute and the Global Alliance for Children, Kathleen sought to increase the opportunity for positive dialogue and the exchange of best practice between the United States and its partner countries. A regular presenter at national and international conferences, Kathleen has appeared on CNN, Fox News, CBS, C-SPAN, PBS and numerous other media outlets.

Kathleen attended Whittier Law School’s Center for Children’s Rights, where she graduated with honors and received a state certified speciality in juvenile advocacy. She and her husband, Matt, are the proud parents of four children and live in Alexandria, Virginia. Kathleen has previously served on the C.A.S.E. Board of Directors.