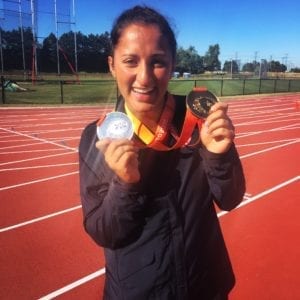 Hannah was adopted from Albania at age 3 and due to a congenital bone deformity, she had her leg amputated above the knee at age 5.  Hannah takes pride in designing the colors and looks of her prosthetic leg which started from her first one sporting puppies and monkeys.  She volunteers her time with young children with disabilities as well as wounded warriors.  She recently traveled to South Africa and worked in an orphanage for children with disabilities.

In addition to track, Hannah has been active in many sports including ice hockey, downhill skiing, swimming, wheelchair basketball, and is certified in scuba diving.  She has her eyes set on representing the U.S.A. in Tokyo 2020 at the Paralympics.

Hannah graduated with honors and her Gold Award from Atholton High School in Howard County, Maryland and is currently a junior at the University of Illinois with aspirations to work with refugees.