Star of Adoption – The Graving Family 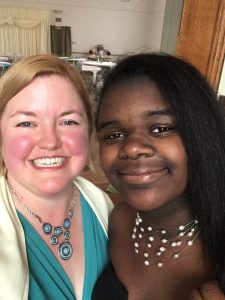 The Graving Family is a 2018 Star of Adoption!

Shannon always knew she wanted to be a mom through adoption.  In February 2012 she took the first steps to find her daughter by attending an orientation on adopting through foster care. That same month, seven-year old Monae moved to Families First in Denver, CO.  For two and a half years, they both did the hard work of preparing for and searching for their forever family. Shannon pursued placements in numerous states and endured a long, frustrating adoption process with dedication and empathy. Finally, on July 3, 2014, they met and on August 17, 2014, Shannon welcomed ten-year old Monae into her life with open arms in Arlington, VA.

They are in most ways an extremely typical family, formed in an atypical fashion.  Atypical is that Shannon is a single-mother by choice, who became a mom at 39 years old of a ten-year-old daughter. Very typical, she cried and cried on Monae’s first day of fifth grade, just like most moms dropping off their kids on the first day of school.  They are a transracial family that sometimes has to explain to how it is that they are related, but more often are stunned by how much they are alike – Monae is a “Graving Girl” just like her mom, grandma, and aunt.  In fact, while we honor Shannon and Monae as Stars of Adoption, the Graving Family is much more than the two of them and includes Grandma Pat, Aunt Heather, and Uncle Rob, as well as loving and supportive extended family members and friends.

The Gravings have relied on C.A.S.E. for incredible support and tremendous insight in weekly family therapy and have attended the annual C.A.S.E. Kids’ Adoption Network (KAN) conference, learning from others who share similar stories. Monae has volunteered at the KAN Conference as well, assisting staff with younger attendees. They are thrilled to be recognized this year as a Star of Adoption.