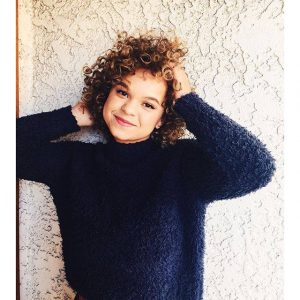 Rachel Crow is a 2016 Star of Adoption! This 18-year old superstar is an American singer, songwriter and actress haling from Mead, Colorado, who first came to the nations attention with her stunning x factor audition in 2011.  Beating out over 150,000 fellow contestants, Rachel made history, as the shows youngest ever participant, at the tender age of 13 and captured both the viewers’ and judges’ hearts.

After finishing in the top 5 on the x factor, Rachel guest starred on many Nickelodeon shows.  She released her first E.P. with Columbia Records, and her song “Mean Girls” perfectly captured the difficulties faced by many high schoolers.  With well over 15 million views on YouTube, the song was a global success.

As an actress, Rachel has guest starred on shows such as The Office, Big Time Rush, Figure It Out, and she also had a recurring role on Nickelodeon’s Fred:  The Show.   Rachel also can be seen along side Ann Hathaway, Jamie Foxx, and Bruno Mars as one of the leading roles in 20th Century Fox’s hit animated feature, RIO 2.  This year Rachel starred in the Disney Channel Original Movie, Invisible Sister, and is the lead in an animated TV project (coming summer 2016).

Rachel is also a young philanthropist with a strong passion for kids in foster care, being adopted from foster care herself, Rachel is committed to making a difference in the lives of kids across the United States. She was honored as the face of National Adoption Day (2013), and is an ambassador for the Dave Thomas Foundation.  Rachel played a pivotal role in raising a record breaking 2.2 million dollars at the 2013 Wendy’s National Convention, where she gave a heart warming rendition of her song Promise to Promise.  Most recently, Rachel made her Broadway debut with Stars4FosterKids and You Gotta Believe, raising awareness for older foster youth in New York City.  Alongside Tina Fey, Megan Hilty, Daren Criss, Charlene Tilton and many others, Rachel helped raise over $500,000 Rachel was so honored to be awarded the Congressional Angel in Adoption Award this past November, the award was in recognition for her work in raising awareness for children in foster care.

Rachel is currently signed to S-Curve-BMG records as a recording artist and songwriter.  She will be releasing her single this spring. Read the Huffington Post’s article about Rachel’s adoption story.