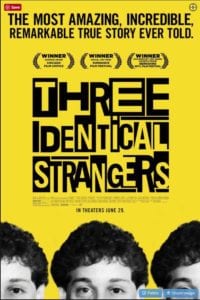 Adoptees and their parents often wonder where the adoptee’s traits come from – their birth family or their adoptive family?  The age-old question of nature vs. nurture is at the heart of this compelling, moving, troubling documentary* of triplets born to a Jewish mother who were separated at birth (really at 6 months of age) in 1961, and placed with three different Jewish adoptive families.  Spoiler alert: (don’t read further if you don’t want to know the whole story).

The adoptive parents were NOT told that their son was one of triplets. The boys grew up knowing they were adopted.  At the age of 19, through an incredible coincidence and publicity, the triplets – Robert Shafran, Eddie Galland and David Kellman, found each other. They became a media sensation, with great focus on their seemingly incredible similarities. It’s noted that they all had experienced various emotional challenges during adolescence.  Soon after their reunion, the boys meet their birth mother.

The triplets live together for a time and open a restaurant.  They all marry and have children. Over time, their differences emerge, and conflict ensues. Robert decides to leave the business. There is distance.  Eddie is described as struggling with depression, diagnosed with bipolar disorder.

In 1995, Lawrence Wright, a journalist researching multiples shared his incredible discovery with the brothers and their families — that the triplets’ separation happened because they were unwitting subjects in an unethical, manipulative longitudinal social and psychological experiment conducted by psychiatrist, Dr. Peter Neubauer in collaboration with the Louise Wise Adoption Agency that placed the boys (and countless other twins and multiples). The adoptive parents had been duped into believing that they were participating in a child development study on adopted children. Over the years, researchers in on the charade periodically visited the families to test and study the boys.

Within the year of the revelation about this study, Eddie, age 35, died by suicide. For the surviving brothers, coping with the tragic loss of Eddie is intertwined with the devastating impact of the revelation about this study.  Along with Mr. Wright, Robert and David tried to discover the purpose of the study, and to obtain the results. Their pursuit of information leaves many questions left unanswered for the brothers as well as for the audience.

However, what the surviving brothers do know is this: Several birth mothers in the study had histories of mental illness, including theirs. Robert and David came to learn that David’s placement with a working-class family, Eddie with a middle-class family, and Robert with an upper-middle class family was part of the study design. In addition, each family had adopted daughters, and each family supposedly represented a different “parenting style” particularly regarding the fathers.  David’s father is described as having been extremely loving, warm, and outgoing and was called an affectionate term, “Bubbala.” Robert’s father was caring but not very involved, busy with his work as a physician.  Eddie’s father, still living and able to be interviewed, is described as having been a very cold, strict disciplinarian, and rigid (Presumably, there were differences among the mothers, but these weren’t mentioned in the film).  Thus, if the triplets’ birth mother had mental illness, it appears the study intended to see what impact different family environments (nurture) would have on the boys, given their common genetic predisposition (nature). As they speculate on Eddie’s challenges, many of the interviewees conclude that Eddie’s father may be “to blame.”  One wonders if aside from the genetic predisposition, was Eddie more impacted by the trauma of separation as an infant?

While the nature vs. nurture discussion may be interesting, I believe that the most significant and useful part of the film for adoptive parents is when Robert describes how Eddie told his brothers that, growing up, he always “felt different” from his adoptive family.  This is not an uncommon experience for adoptees, even those who describe having loving, well-meaning parents.  While children growing up in their biological families may certainly feel this way, when an adopted person feels this way, it can be especially painful and challenging.  Eddie is described by everyone interviewed as having been a very warm, emotional, loving, generous, sensitive, gregarious kind of guy.  How did that personality mesh with a father described as cold and reserved?  Is this part of what made Eddie feel different in his family?  And how painful was this for him?

Realizing this significance, as adoptive parents, we can reflect on how we handle the differences we perceive between ourselves and our children, and explore our child and/or teen’s experience around fitting in and feeling a sense of belonging in the family.  We can strive to convey the message – yes, you are different in these ways, and I honor, respect those differences.  We can stretch out of our comfort zones to embrace and support how our children are different from us. And we must find ways to help our children feel just like us and that we are just like them.

If you’d like to learn more about what is on the minds of teens around differences, identity and other themes related to adoption, please check out our brand-new publication, Beneath the Mask: For Teen Adoptees: Teens and Young Adults Share Their Stories.* Share it with your teen.  It may encourage them to express what they may be struggling with. *This is an affiliate link, meaning, at no additional cost to you, we will earn a small commission if you click through and make a purchase. We only recommend resources that we believe are valuable to our readers. Our teen workbook is also available for sale on our own C.A.S.E. online store.