How has your life been touched by adoption? Is there a person who stands out as the “star” in your adoption story? C.A.S.E. invites YOU to share a story about your star of adoption for an opportunity to be featured on our website and Facebook page. Submit your story (200 words or less) and an optional photograph to Ellen Singer.

Below is a heartwarming story about a Star of Adoption that deserves recognition. 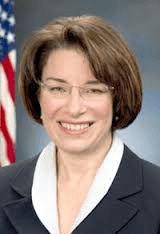 Amy Klobuchar (D-MN) is the first woman elected to represent the State of Minnesota in the United States Senate and is one of only 20 female senators currently serving. She is the Senate Co-Chair for the Congressional Coalition on Adoption which works on issues pertaining to children in need of permanency, children in the foster care system, and domestic and international child welfare, as well as to advocate for every child’s right to a safe, stable and loving family.

“I have long worked to advocate for these loving families, and through my new leadership role in this bipartisan caucus, I intend to build upon my work to eliminate red tape in the adoption process and help keep adoptive families strong.”